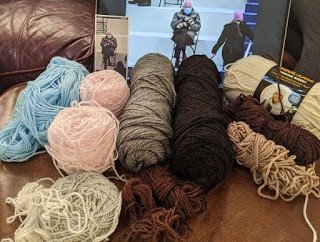 I guess, being a knitwear designer comes handy as I am able to create a knitted toy that will fit my vision as to what the doll should look like and how much it hopefully will resemble the original Bernie Sanders in the now iconic photo.

As with every design it starts with picking up yarn. I am using stash yarn as much as possible and this doll is not an exception. I looked through my stash and narrowed it down to those yarn as they are closest to the colors, as seen in the photo. I would like the doll to be able to either sit or stand, and have the clothes removable, and I also would like to include the chair for the doll to sit on.

I should be working on some other knitting projects that have been on my needles and have some sort of deadline attached to it, may it be for few submissions, toy mystery KAL, knitting pattern samples,  etc.  I will post another work in progress blog post next Friday as to what I actually decided to work on.

And those who are reading and wondering if I will type up and make the pattern available for other to knit their own doll;  I will do that after the toy is finished and I am happy with the result.

Thank you for visiting.